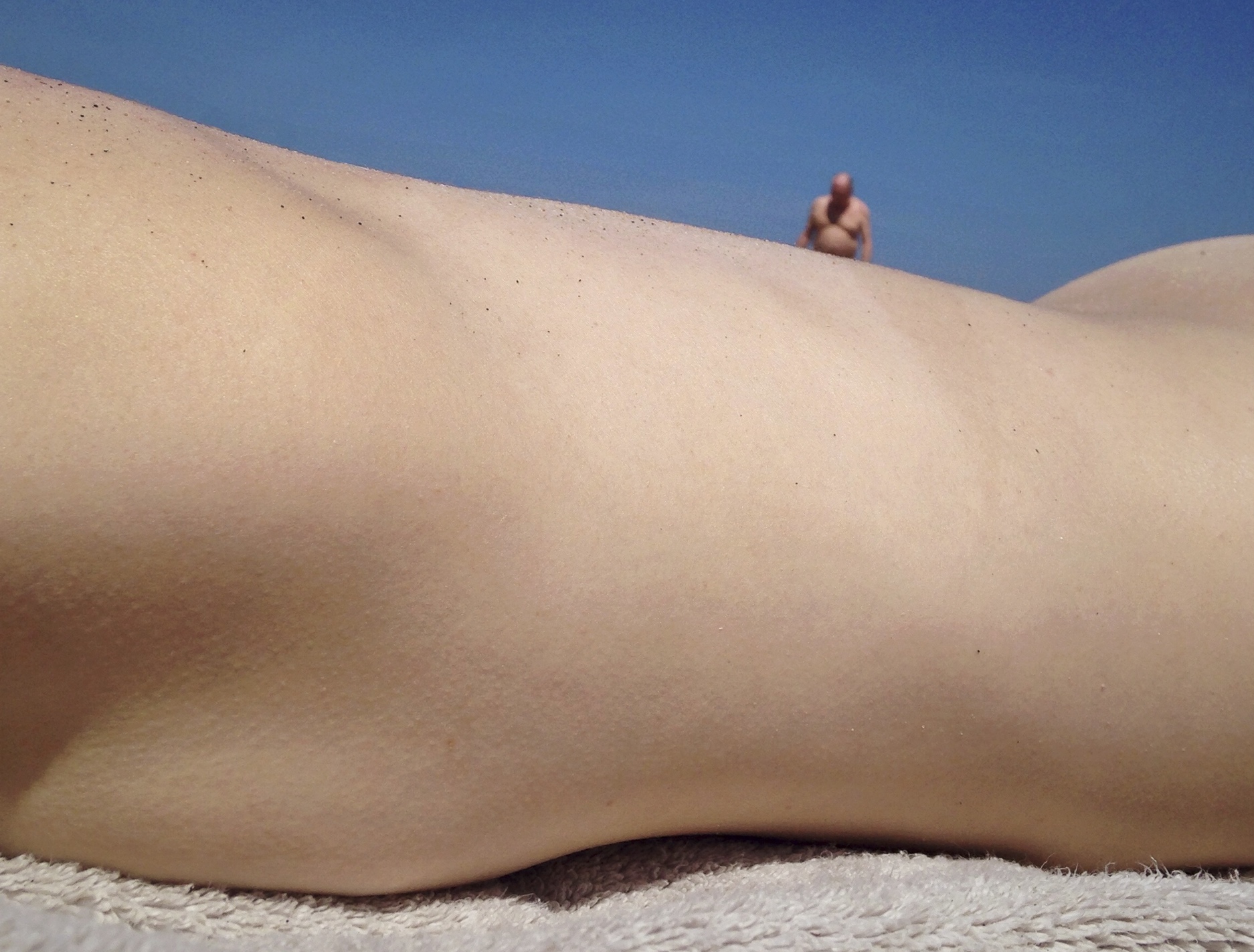 Once upon a time, although no one remembers exactly when, you had to take pictures with a camera, and you had to wait days or weeks for the results – until the film roll was finished, anyway. When you picked up your pictures, whatever happened some time ago, you had it on paper. Back home, you’d show the pictures to family and friends, go back to the lab to have more prints made. Meticulously, the pictures were stored in drawers or boxes. The special ones would be put in an album, with the date and a couple of words. Inscribed into the photograph was a mnemonic function, and the photos ensure: “It has been like this.” (Roland Barthes) 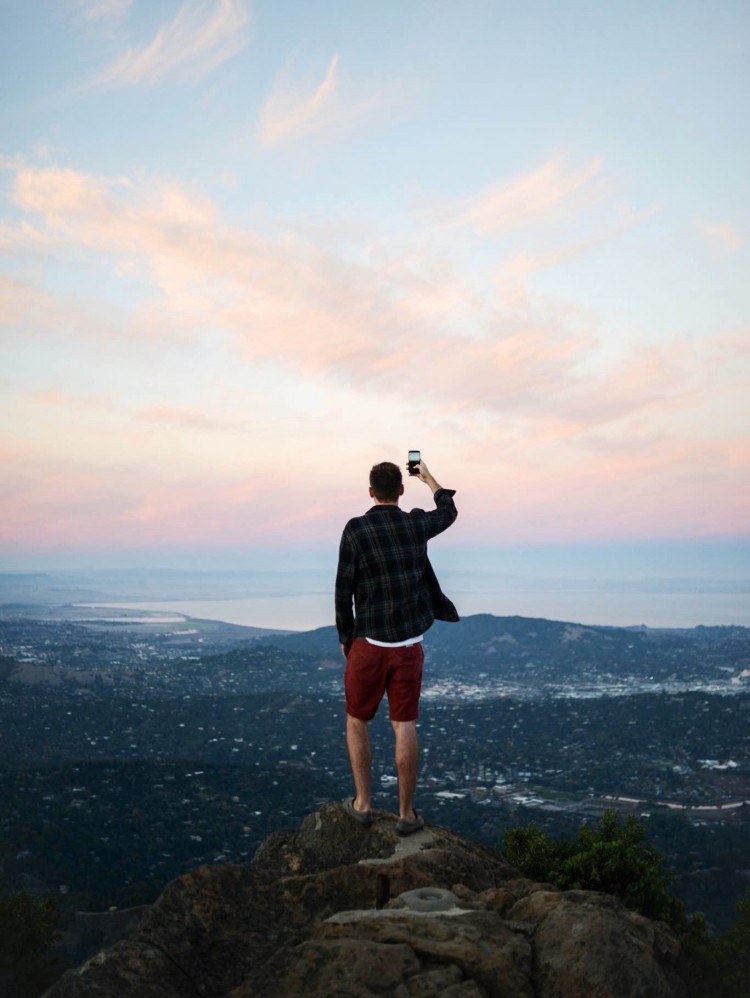 Just before the end of the year, the photo-sharing service Instagram was reported to have more than 300 Million users. Immediately followed by the headline that Instagram is bigger than the messaging-service Twitter. A picture says more than a thousand words, so you’d rather communicate via images in the first place. People want to see images, anywhere and anytime, share and show them. Look, “it is just like this.” (Wolfgang Ullrich) The mere name Instagram says what it is about. Everything in an instant, it is the instant that counts and everybody is supposed to share the experience. It’s just that the moment passes, and the digital snapshot gets lost in a stream of images. Why muse solitary on a mountaintop when you can hold up your phone and reproduce the vista for everyone in real-time? Roughly two hundred years after Caspar David Friedrich’s hiker in a frock, the Modern Wanderer in shorts, by Dino Kuznik, has become the emblem of a contemporary way to appropriate the world via media.

It might seem contradictory to ask a couple of Instagrammers to name their Instagram of 2014, and thus pick another user’s photo, that stuck in their mind. Apart from sunsets, pets, selfies, foodies, fingernails, appealing community photography (spiral staircases, subway stations, symmetrical things, coffee), and maybe Jerry Saltz stirring up the art scene, there are photographers who share their work on Instagram. For some it was the app that made them (mobile) photographers, like Michael Schulz from Berlin (@berlinstagram). The app can be a portfolio, a playing field, a photographer’s diary, or a digital gallery where you can put up or take down pictures, as Irina König (@irina_jwd) says. Some just delete all their work, as did Richard Koci Hernandez (@koci). Figuratively speaking, you take down all pictures, end a show to clear the walls. The photos have to be curated within the app. “Grid management”, as Dolly Brown from London (@londonlivingdoll) calls it. The instantly uploaded photo becomes a #latergram, it is posted only, when it fits the curatorial concept.

At the end of the year, a couple of Instagrammers went through the digital galleries. Here is an exhibition of their favourite pictures: 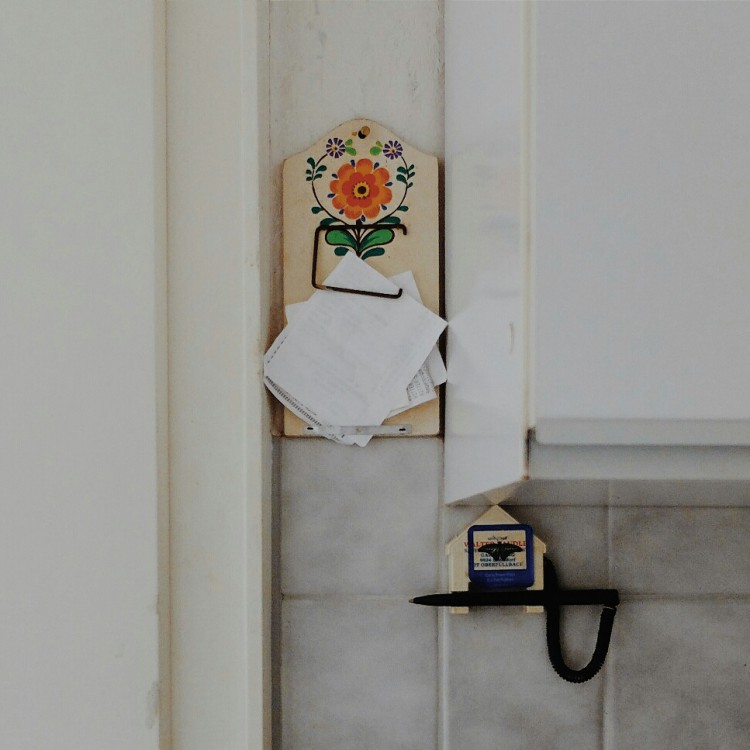 „A little snippet of everyday life that otherwise hardly exists on Instagram. Christina captured her grandparents‘ everyday life with an affectionate look. The painted clipboard, and the ball-pen hanging by a cord, probably hanging there for years or decades, seem so familiar and touching, as if you had known them a lifetime.“ - Knut Mierswe @knurrt, Berlin 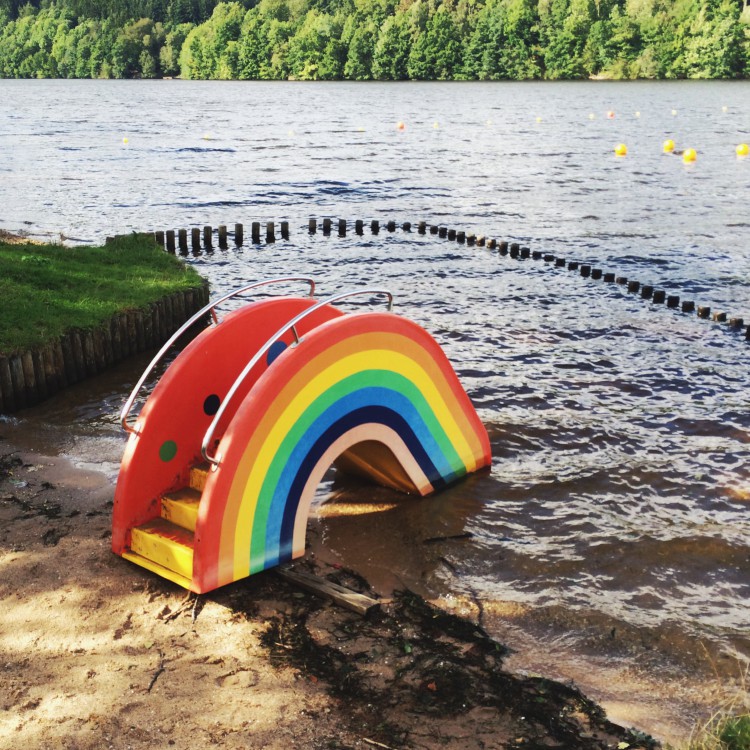 „A drop in the ocean, when you look at the wealth of imagery that passes us by. A moment of hope, off-hand expression of being there. With no agenda or self-awareness, a summation of truth and beautiful lightness. @jorgsengers sums up a year in an image, this picture reflects exactly what I think Instagram should be, a community souled depiction of our everyday. Notable mentions of beauty and truth should also go to @teklan, @rustyfd912, @rdstaley and @hokaytokay.“ - Tom Skipp @tomskipp, London 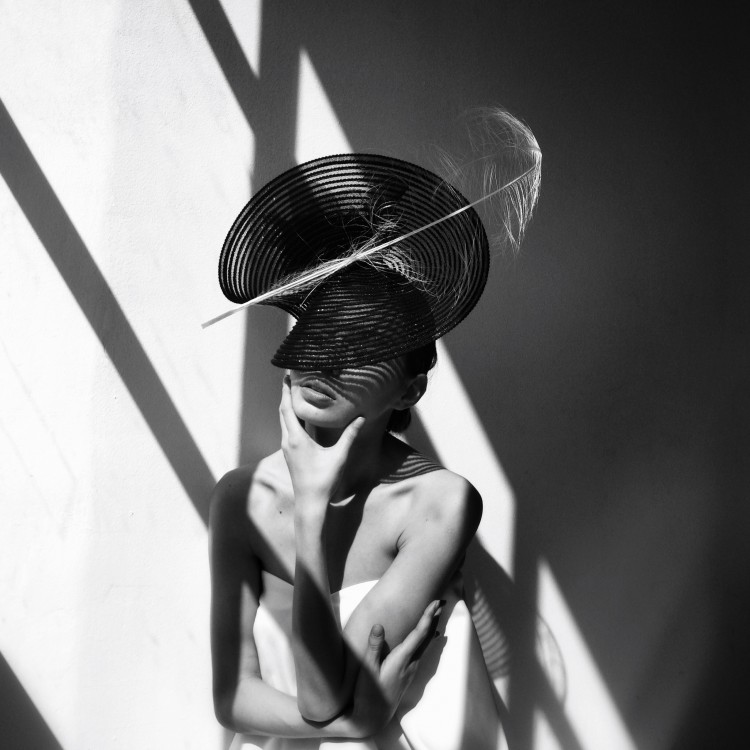 „I admire her conceptual work, he way she handles colour, and the sensitivity of her pictures. With the captions, the images obtain a deeper meaning.“ - Phoebe Cortez Draeger @palomaparrot, Dortmund 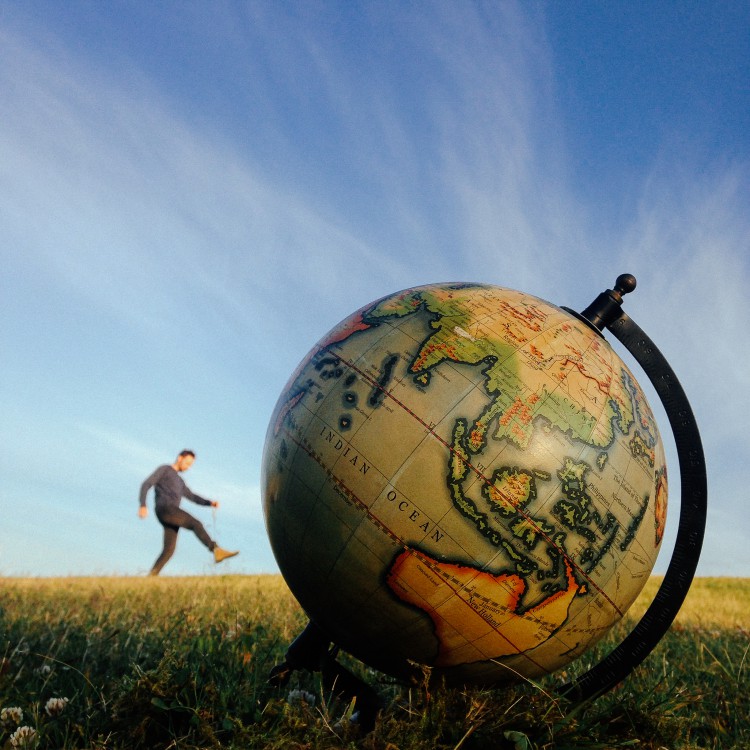 „The past year @locarl has inspired me a great deal, with his interplay of big and small motifs. This photo is an emblem of the 2014 world-cup that has thrilled the entire world.“ - Linda Berg @lindaberlin, Berlin 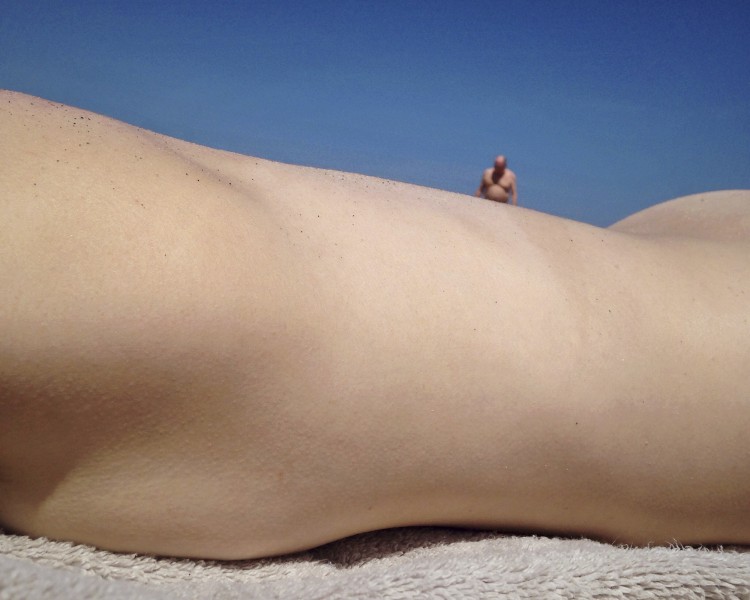 „This image by Ali Kate Cherkis struck me this year, I studied it for a long time before writing about it for #MPNselects. I think it’s a great photographic study, a swathe of female skin but lack of detail, with the reverse appearing from the man who appears above, emerging from the female landscape. It can teach you a lot about what a photo can reveal, or choose to hide from view.“ - Olly Lang @oggsie, London, founder of @mobilephotonetwork 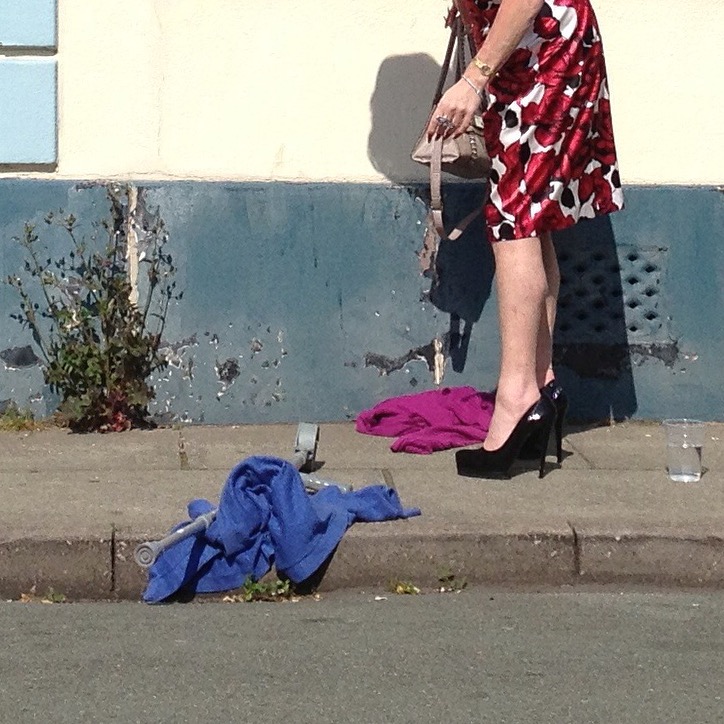 „A lady, a dress, a handbag. But also a lot more than that: two items of clothing, a crutch and a glass of water on the sidewalk. Will she bend down for one of the objects or will she walk past them? We will never know. Not too many words should be lost about my picture of the year.“ - André Krüger @bosch, Hamburg 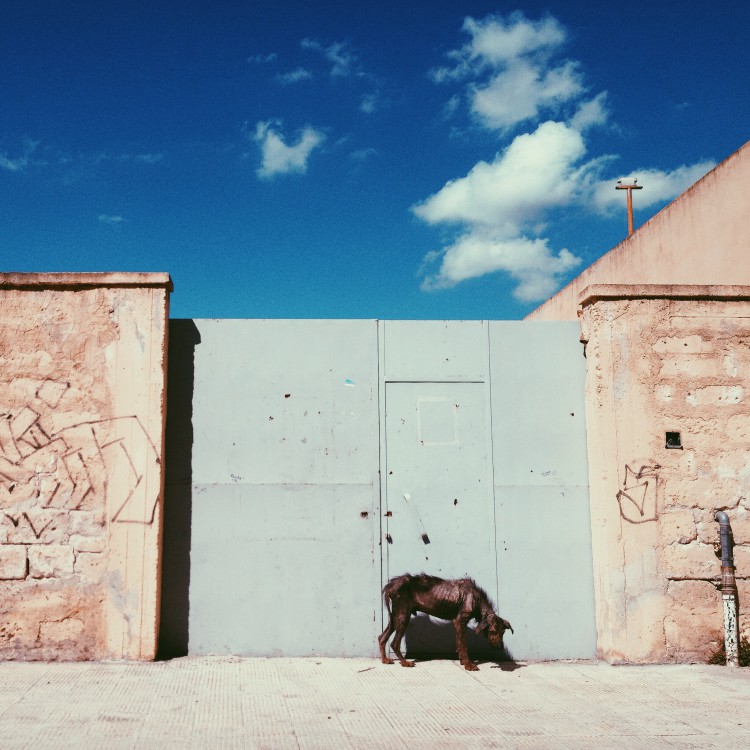 „I have been amazed at the work coming out of Instagram. What I love most about it is that it has taken a role as a picture journal for many creatives. But with so many images being produced out there Instagram has also added to the high “cliché” value of much of the work. Of course this is fully understandable as we now live in a picture sharing time where the ease and spontaneity of mobile photography has turned the most unlikely people into photographers. As someone once put it, Instagram has liberated the art of photography. It has gone from an elitist art only viewed by a few in galleries or expensive photography books, to an art to be viewed and practiced by everybody! A big like for that.

A few users out there, call them evangelists of true art, have taken it upon themselves to weed out the oversaturation of images made for likes so that unique talent can come forward. This brings me to one of three artists (Maria Moldes - SPAIN aka @mariamoldes, Hayley Eichenbaum – USA aka @inter_disciplinary, and Piero Percoco – ITALY aka @therainbow_is_understimated) that I feel have a clear and unique personal voice in their work, showing us a new way of looking at the world. The picture I chose is of a dog against a beige wall. It’s one of many of Piero’s images that pierce right through you. Piero has the ability to eliminate the noise in his pictures and center the focus on a certain silence in it’s subject. This  way he give us the chance to take an intimate look inside the life and emotion of his subject. This is what I see all to clear in his picture of a dog. It’s visually beautiful and emotionally haunting at the same time, and does not leave you. This I feel is one of the signs of great art!“ - Robert Dodd @vmaker, Harlem, NL, creator of @theweekendwalkabout 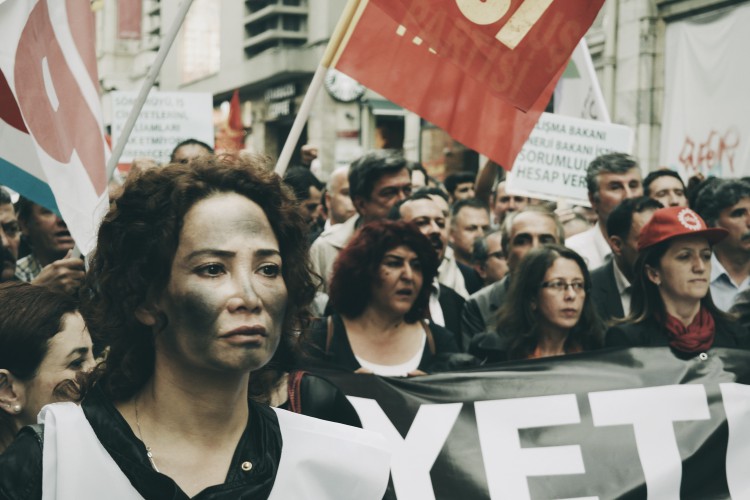 „One of the few photographs I remember instantly, is Can Guraslans picture of a demonstration in the aftermath of the mining disaster in Soma, Turkey, and it is my favourite photo in 2014. It obviously is DSLR, not even square and not a typical Instagram picture at all. But like Facebook is not a students‘ network anymore, Instagram is not a smartphone photo community. And I like that.“ - Michael Schulz @berlinstagram, Berlin